Showing posts from 2005
Show all

Bush did not lie, but the war critics are

November 18, 2005
We have heard the littany from the Left from months. "Bush lied, people died." A catchy slogan that is reminiscent of Lenin's observation that "a lie told a thousand times becomes the truth." The lie, of course, is that Bush deliberately deceived anyone about the presence and threat of WMD from Saddam Hussein. We know that the United Nations Security Council in November 2002 felt that Iraq had not accounted for its WMD and cooperated with inspections to verify its obligations under the cease-fire and prior UN resolutions: FULL TEXT of UN Security Council Resolution 1441: http://www.state.gov/p/nea/rls/15016.htm Excerpts: "Recognizing the threat Iraq’s non-compliance with Council resolutions and proliferation of weapons of mass destruction and long-range missiles poses to international peace and security, "Recalling that its resolution 678 (1990) authorized Member States to use all necessary means to uphold and implement its resolution 660 (1990)
Post a Comment
Read more

September 12, 2005
In a widely republished September 4th interview on NBC, Aaron Broussard from Jefferson Parish, Louisiana, went into a partisan tirade against the Bush Administration for its failures in hurricane relief. MSNBC story. http://www.msnbc.msn.com/id/9179790. The interview contained some serious allegations, which were apparently not checked by NBC or any other "so-called mainstream media" source that publish the interview and its allegations. While I was waiting for Fact Check or a blog site to debunk this politically inspired show-boating, I did a little checking. The guy's mother may well have drowned in the nursing home. But it is apparent to me that the rest of this allegation is political hype. No federal official was going to reassure him that they would be there "on Wednesday".... It just does not happen that way. The implication was that they were on the way to that building, which is plainly inaccurate. If there were trapped elderly people with cell phone
1 comment
Read more

The Junk Science on Depleted Uranium

July 06, 2005
The United States military, joined by many other nations, uses depleted uranium in its anti-armor ordinance and in its armor plating due to the material's physical density. It is more widespread as a penetrator, although at least the latest Abrams tank also uses it as a plating material in the composite armor. It is not used due to its radioactivity, which is quite low, i.e. that is why it is called "depleted." Fortunately, the Leftist criticism of DU is a much of total and complete junk. Utranium oxide is not a gas, it is a mineral. The World Health Organization has been all over this issue since Bosnia as well as the International Atomic energy Agency. It goes nowhere. Depleted uranium is what is it named for- depleted. It contains a tiny fraction of the radioactive variety of uranium isotopes. Its use as a weapon is because of the density of the metal, not its other attributes. There is no impact from "poison gas" on the receiving end of a DU round. The I
1 comment
Read more
April 13, 2005 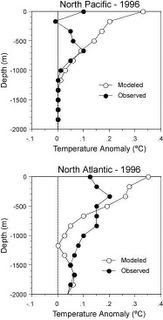 April 13, 2005
I was waiting for someone objective to get the data published by Dr. Barnett and to re-run some numbers. While Barnett claimed his "model" reproduced the impact of greenhouse gases on the earth's temperatures, and the liberal press went to town, the sober and analytical look at the numbers debunks his claim. After a statistical analysis, the World Climate Report shows the above graph that contradicts the claims of Barnett. The Barnett study - like so many with a political motive- "smooths" out the data to fit the hypothesis. "What we are seeing with the Barnett paper is more of the same. We have claims that a general circulation model can reproduce ocean temperatures when, in reality, it cannot. We have evidence of a human fingerprint in ocean temperature patterns that arises only when the data are substantially smoothed. And we have a press corps that's even more convinced of the certainty of significant human-induced global warming. In fact, howeve
3 comments
Read more

Who was Che Guevara? What if Hilter Had Been Photogenic?

March 31, 2005
I will not add much of my prose to that which has been written by many who have spent more time studying the real Che Geuvara. So I will be content to post some excerpts and links that lay out the real story of this pop icon and the fraudulent nature of his glorification. In the beginning, however, I must observe that Che Guevara's real story contradicts every value held dear by those who glorify him. They oppose capital punishment: he believed in it and practiced it without trials on guilt or innocence. They cherish personal freedom: he sent young people to re-education camps for listening to rock music. They value heroism and personal honor: he was at his best shooting unarmed men. They respect intellectual achievement: his writings are petty regurgitation of Marxist slogans. They try to epitomize personal freedom: he was the master of collective suppression of freedom. They extol love: he preached hate as a political tool. “The fog of time and the strength of anti-anti-Commun
Post a Comment
Read more

Democracy and change in the Middle East

March 04, 2005
The "mainstream press" - which will be mainstream no more at current subscription and viewer rates - widely jeered at President Bush's pronouncements on spreading democracy in the Middle East as a solution to regional warfare and conflict. Now several years into the Bush policy, a pattern seems to be emerging that even many critics cannot ignore. Elections in Afghanistan (no NYT "quagmire"). Elections in Iraq (no terrorist bloodbath). Coalition building in Iraq across religious and sect lines (no fundamentalist regime). A real Palestinian election and a pro-peace government. Spontaneous outbursts of freedom and tolerance in Lebanon. A possible contested election in Egypt. And don't forget Libya's turn-around. Enormous pressure on the tyrant in Syria, even from Arab governments. Growing resistance to the fundamentalist religious dictatorship in Iran. This world is obviously not following the New York Times/CBS script! The growing isolation of the ter
Post a Comment
Read more

More fraud at the IPCC

February 08, 2005
One of the IPCC scientific team members just quit over the obvious lack of ethics by the IPCC Panel. In an open letter, Chris Landsea, of the National Oceanic and Atmospheric Administration, said: "I personally cannot in good faith continue to contribute to a process that I view as both being motivated by pre-conceived agendas and being scientifically unsound." http://sciencepolicy.colorado.edu/prometheus/archives/science_policy_general/000318chris_landsea_leaves.html Landsea is one of the world's top hurricane experts, who was asked by a lead author of the IPCC's Fourth Assessment Report, to develop a segment on the impact of global warming on the future intensity of hurricanes. All previous IPCC Assessment Reports said that there is no scientific evidence that there is a relationship between global warming and an increase in hurricane and other severe weather frequency or intensity. Reports by Landsea and others cited in my earlier blog posts provid
1 comment
Read more
February 02, 2005 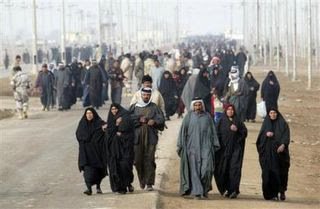 Thousands of Iraqis had to walk miles to vote with roads closed for security reasons. It is difficult to overstate the significance of these images in the Moslem world. How consistently wrong does the Left and its Media buddies have to be before more folks start ignoring them? The trend will accelerate in 2005: you cannot beat hope and inspiration with defeatism and dispair.
1 comment
Read more
January 31, 2005 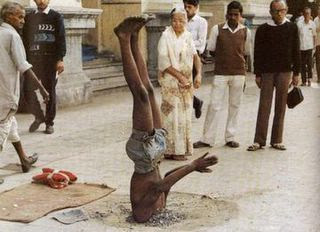 January 31, 2005
One can never express strongly enough the total and absolute failure of the American Left to be correct on any issue. In the last three years, the Left has built on a record of being totally incorrect, even delusional, about the Soviet Union in the Cold War, to a series of emotional, and unfounded, inaccuracies about Afghanistan and Iraq. Never expressing any loss of face or sense of error, the Leftists continue to predict the worst for our country and our allies, as long as their folks are out of power. This was the crowd that often argued the Cold War was caused by us provoking the Soviets, who were just like us (with the unmentioned exception of 10 to 40 million people they killed in the 20th Century and the complete suspension of free speech, elections and private property). These pundits were sure that U.S. military action in Afghanstan after 9-11 would lead to an American defeat, like the Soviets' and Brits' failures. Then they switched to "Afghanistan will
Post a Comment
Read more
January 28, 2005 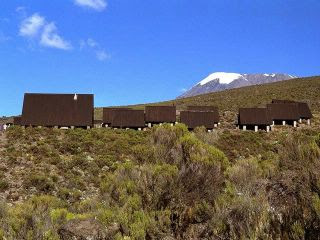 Kilimanjaro in the distance. Despite the lack of recent atmospheric temperature increases, the glacier is retreating at a slow rate. Studies show no correlaton between temperature and glacier behavior.
Post a Comment
Read more

January 28, 2005
Greenhouse gas Kyoto advocates will use every scare tactic in the book, including the discredited Kilimanjaro theory. One author recently commented: "The Kilimanjaro ice field has melted by 80% it's maximum size photographed in 1912 AD. Projection of the melting rate into the future suggests that the ice cap will most likely disappear by 2015-2020 (10-15 years from now). This result is important because the ice sheet has been stable at this site for many millennia - the observed recent melting rate is exceptionally rapid." The problem with the statement is that it is totally devoid of factual support at every level. The temperature data for East Africa support no inference of GHG warming: The National Academy of Sciences published a report* last year that defines the geographic regions of warming and cooling during the last 20 years. Surface measurements of East Africa show no warming trend (Fig. 6.2, p. 34). Weather satellites show a pronounced cooling trend of the
Post a Comment
Read more
More posts