Showing posts from 2007
Show all 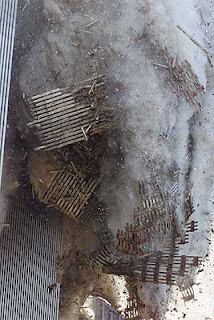 The conspiracy theorists repeat like a chant that allegation that the WTC buildings "fell at near free fall speed." This is taken to provide some sort of support for their theory that it had to be a controlled demolition. Leaving aside the issue that they never provide any engineering support for why this hypothesis explains controlled demolition [a unstated ridiculous supposition that multiple charges on each floor blew out the supporting structures timed to hundreds of a second], there is absoluely no evidence that the buildings free at "free fall speed." The numerous photographs and videos all show that debris from both WTC Towers was falling faster than the floors were collapsing. See above examples. The "free fall fallacy" has been debunked for years. See 911 Myths ; Debunking 9-11 Conspiracy Theories ; and Physics of 9-11 Events . Randy Mott
Post a Comment
Read more 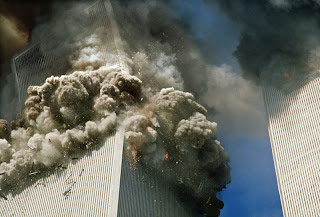 The variety of poorly thought-out conspiracies about the September 11, 2001 attacks continues to grow with time, on this the sixth anniversary. The common element to the theories is the allegation that the aircraft that hit the buildings could not have caused their collapse. Many argue that missiles were fired that did "the real damage." Others theorize about demolition charges. PHOTO: WTC South Tower starts to collapse at point of aircraft impact in anything but "symetrical" manner. The FACT is that nothing in any of the theories from these fringe groups can possibly account for the explosive force of the actual aircraft involved loaded with nearly full fuel tanks. The explosive force and kinetic energy of a loaded 757 with the fuel tanks full is more than any missile in the US arsenal, except nuclear: 43,000 liters 0r 387,000 kilograms of TNT (see below). A cruise missile (Tomahawk) only carries 1000 pounds of explosives and has no particular
Post a Comment
Read more
More posts