Showing posts from May, 2008
Show all 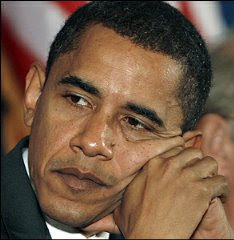 If the bubble has not burst, it will likely do so on Tuesday. The erosion of support for Barrack Obama is eating away at his polling numbers and his ultimate electability. His onetime clear, even double digit, lead over Hillary Clinton is gone in national polling. She now leads for the first time in three months. His double digit lead in North Carolina is down to mid-single digits. His likely share of the white vote there will undoubtedly hit new lows, perhaps enough for an upset there. He quit gaining in Indiana and Clinton is pushing the lead back up. His favorability ratings for the general election are also dipping and support among independents is waning. His illusionary support among Republicans is also a thing of the past. He will likely "mobilize the base" of the GOP better than any recent candidate from his party. More and more people are focusing on the message and his positions, which can no longer by glossed over with "hope and change" generalities.
Post a Comment
Read more
More posts