Showing posts from September, 2008
Show all

The 2008 Election moves into Familiar Territory 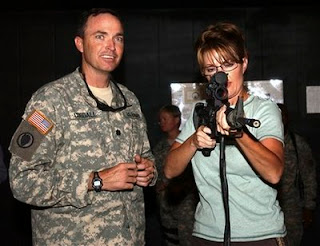 If you ever fired an M-16 you can see that Governor Palin seems to know what shes doing by the picture alone. See her leading arm flexed and tight pulling the weapon into her shoulder and her right arm relaxed on the trigger. This is not just a poise for the photographers, the woman knows how to shoot. Her history verifies this. Governor Palin's authenicity on this and other issues is the mark of someone who has had a real life outside of politics. Senator McCain similarly has had an heroic life before politics. Our forefathers envisioned that our political leaders would be citizens first and politicians second. James Madison assumed that Representatives would be "called for the most part from pursuits of a private nature and continued in appointment for a short period of office." David Walker, Comptroller General (head of GAO), observed correctly in a speech in 2006: ...the founders didn't believe in full-time politicians. After all, our first elec
Post a Comment
Read more
More posts